The boars are back in town! Evil Zionist pigs return to destroy (only) Arab farms 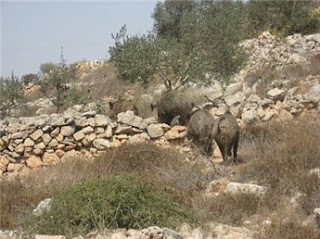 It’s been over a year since I last reported on the perennial stories, often in Ma’an, of “Jewish settlers” releasing wild boars to wreak havoc on Palestinian Arab farmers.

But the boars are back!

Palestinian farmers in Salfit on Tuesday accused settlers of releasing wild boars onto their land to damage their crops.

Farmers accuse settlers of deliberately releasing the boars onto their land.

Residents and local officials in the area have for several years complained that settlers release boars, which have caused injuries and destroy land in the rural communities.

This time, instead of reporting it as actual fact as it used to, Ma’an quotes a seeming authoritative source:

The Applied Research Institute – Jerusalem says that while Israel claims it cannot control the wild boar population in the area, and the purposeful release of pigs cannot be confirmed, Israel’s separation wall has pushed the animals to search for new habitats.

However, as I have documented, the ARIJ has directly blamed the boars on Jews in the past – by quoting Ma’an!

Since the boars are indigenous to the region, and they attack Jewish farms as well, the idea that the security barrier keeps them concentrated on only the eastern side is equally ludicrous. But, hey – this is Ma’an.

Its not like anyone important parrots the absurd accusations, right?