Saudi Arabia’s religious police have told foreign players with tattoos on their arms to cover such drawings while on the field, saying they are adversely affecting young Saudis, a newspaper reported on Monday.

The Commission for the Promotion of Virtue and Prevention of Vice sent a letter to the Higher Youth Committee asking it to warn all foreign players in the conservative Muslim Gulf kingdom to cover their tattoos before going into the field during matches, Sabq Arabic language daily said. 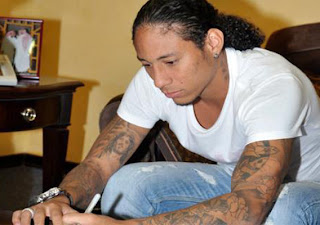 The letter cited Columbian player at Al Nasr Club, Juan Pablo Pino, whose hands and shoulders are covered with tattoos “in violation of existing rules.”

“These tattoos have negative effects on the Saudi youth…you are asked to draw the attention of all foreign players in the Kingdom to the need to abide by the rules and cover their tattoos during matches,” the letter said.

The paper said the letter contained a photograph of Pino, showing his two arms are covered with tattoos.

The 24-year-old Pino and his pregnant wife were detained by Commission members at a Riyadh shopping mall this week on the grounds he was wearing a T-shirt without sleeves.

“Sleeveless shirt is a threat to Saudi’s society, and the tattoo is an insult to our local Muslims. It is completely a negative influence and would send wrong message for the Saudi youths who may imitate him,” the letter said.

Pino is under contract to play for Saudi Arabia’s Al Nasr football club. He has expressed his “deep sadness” over the incident and said that it was not his intention to violate the laws of the country. The communiqué adds that the player was in the mall “to buy Muslim clothes for his wife, so that she can go out in public dressed in a respectful manner.”

Last year, Romanian player Mirel Radoi, from the Saudi Al-Hilal club kissed the cross he was wearing after scoring a goal. The episode outraged Saudi Muslims and caused a media outcry.

Following the incident however, Pino’s pregnant wife is so distressed that she is now demanding that she and her husband be allowed to leave Saudi Arabia immediately. Al Nasr club has asked its Argentine coach Gustavo Costas to try and persuade Pino’s wife to change her mind but his attempts so far have been futile.

The Argentine coach sent to persuade Pino’s wife himself, also had similar issue. In an interview with the Peruvian newspaper El Comercio, Gustavo Costas told about his new life in Saudi Arabia (previously he coached the Peruvian team in Lima, Alianza Lim). In Lima he made the sign of the cross before every game, and wore a rosary around his neck. “Now I can not do this in public, I can only do it in the locker room. If I made the sign of the cross publicly, the Saudis would kill or stone me,” said Costas.

It is dangerous to be a Christian soccer player in the Kingdom – as long as our heroes at the Commission are on the case!