Over 2900 Palestinians killed in Syria. HEY – Jews are building a house! 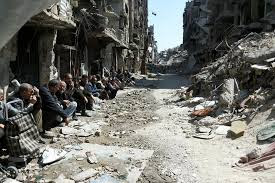 According to the Action Group of Palestinians from Syria, so far 2,910 Palestinians have been killed in that conflict.

Hundreds died under torture in Syrian prisons. Scores haven’t been heard from since they were abducted. Dozens of medical personnel have been killed.

You wouldn’t know any of this from reading the mainstream media or “human rights” organizations’ social media feeds.

But if Israel approves a single step of a multi-step process that may one day result in a Jew being allowed to build a house in his historic homeland, the media and NGOs get very interested.

Which goes to show that the world doesn’t care about Palestinians. It cares about finding reasons to single out Jews.

Palestinians are not treated as victims – but as ammunition.