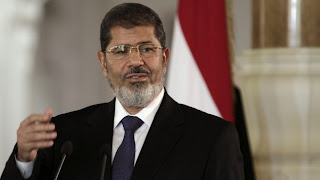 A report was referred to the Public Funds Prosecution on Thursday accusing President Mohamed Morsy of profiting from his position and giving unfair advantage to business figures who are members of the Muslim Brotherhood.

Saeed Mohamed Abdullah, founder of the Independent Association to Fight Corruption, filed a report to the public prosecutor accusing Morsy of reaping profits to repay the money spent on his election campaign. Abdullah claims this amounts to LE2 billion.

According to the allegations, Morsy has still not made public the funding sources of his election campaign. The Freedom and Justice Party would not have legally been able to raise those funds.

The report also highlighted the appointment of Hassan Malek, a businessman and member of the Muslim Brotherhood, as head of the businessmen delegation. The report accuses Malek of extracting and exporting phosphate without paying any charges or taxes to the state.

This will be an interesting test to see how different the new Egypt is from the old.

“We changed a leader but not the regime,” said Negad Borai, a prominent lawyer and rights activist. “It is difficult to accurately assess his performance after he spent only three months in office, but he clearly has no vision and is going about governance haphazardly.”

Underscoring those fears, lawyers representing Morsi obtained a court ruling to shut down a private television station whose owner ranted against the president and the Muslim Brotherhood on air. The station’s owner and a newspaper editor are facing criminal charges.

Morsi also did not object to the imprisonment of a Christian for “insulting the president” — a seldom-used charge.

An insider at the presidential palace, who spoke on condition of anonymity because he was not authorized to release the information, says Morsi was not involved personally in a flurry of court cases against his critics, but the proceedings were initiated by lawyers from the Brotherhood or closely linked to the group.

He also said that decision-making is restricted to Morsi and a small group of senior Brotherhood leaders who meet at the president’s home in an upscale suburb in eastern Cairo.

Alaa al-Aswani, a bestselling novelist and rights activist, wrote Tuesday in the independent newspaper Al Masry Al Youm that the time has come to take Morsi to task.

He pointed to a series of cases in which police were accused of abusing suspects, which although nothing on the scale of the torture under Mubarak’s regime. He also noted Morsi has secured the support of the powerful state-owned media. He also charged that Morsi is suppressing freedom of expression and has failed to deliver on his promises of inclusion by allowing Islamists to dominate the drafting of a new constitution.

“The picture is now worrying,” he wrote. “It’s like nothing has changed in Egypt after the revolution except for the identity of the president — Mubarak is gone and Morsi has come.”