More than you ever needed to know about "goyim" 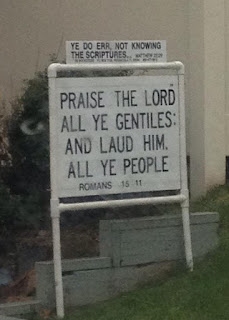 Junior Elder took this snapshot of a church sign that he passed by. He amused because he assumed that the verse was a funny translation of Psalms 117:1, “Praise the Lord, all ye nations (goyim); laud Him, all ye peoples.” (JPS 1917 translation.) His assumption was that someone was too clever by half and mistranslated “goyim” as “gentiles” which is how the word is sometimes used colloquially, even though it means “nations.”

But a closer look shows that the sign didn’t quote Psalms, rather it quoted Romans in the Christian Bible.

The verses are so similar, though, that it was worth researching.

Romans of course was written in Greek, and the word at issue here is “ἔθνη,” , pronounced “ethnē.” Strong’s translates this as “a race, people, nation; the nations, heathen world, Gentiles.”

Apparently sometimes in the Christian scriptures the word refers to nations, and sometimes to gentiles.

The Christian commentaries clearly want to emphasize translation of the term as “gentiles”  based on the context – and this is the theme of the chapter, where the word “goy” is quoted from other parts of the Jewish scripture and translated as gentiles as well! 15:9 quotes Psalms 18:50 (Hebrew verse numbering), and 15:10 quotes Deuteronomy 32:43 (where in context the word clearly refers to nations besides Israel.)

The chapter is apparently trying to retrofit the Jewish scripture to refer to Christian theology, which explains why the translators chose to use the word “gentiles” rather than “nations.” Clearly the Tanach sometimes used the word “goy” to refer to Israel alone as well so the translation seems more to be geared towards religion than accuracy. (The Biblical mentions of Israel as a “nation” and as a “people” are the best answers to those, like the PLO, who insist that Jews are not part of a nation but merely members of the same religion.)

It is just amusing to me that possibly the first people to translate “goyim” into “gentiles” n English were, in fact, gentiles!

(Maimonides used the word “goy” to mean gentile several centuries before King James. But in Biblical Hebrew it never meant an individual gentile.)