How do you treat a lying, biased reporter?

How do you treat a reporter who reports on things he couldn’t possibly have seen, ignores video evidence that disproves what he is reporting even though it is available before his article is published, writes a laughably biased article that is easily proven wrong, lies about easily verifiable facts and then brags about how he is, in fact, biased and writes with an agenda?

When his lies and bias are against Israel, you give him an award, of course!

In the event’s 55th year the chief correspondent, Paul McGeough, won the award for the best print news report for his story ”Prayers, tear gas and terror”, which covered an attack by Israeli commandos on a flotilla of aid ships heading for Gaza. The judges praised McGeough for his courageous journalism and writing excellence and commended the story for its newsworthiness and degree of difficulty.

McKeough wrote in his prize-winning piece of fiction -oh, sorry, “journalism” – the IDF “hunted like hyenas” and that the attack was “timed for dawn prayers” and that “a lot of people moved in to shelter” the first Israeli commando on deck “with their bodies.” McKeough, who was not on the Mavi Marmara, must have interviewed Ken O’Keefe for his “facts.” 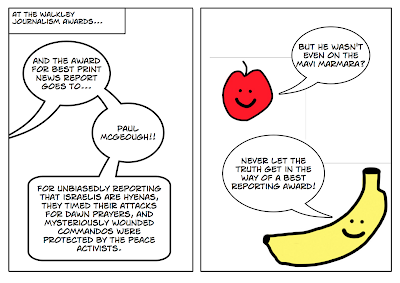