Hamas tries to quash rumors of a tsunami hitting Gaza 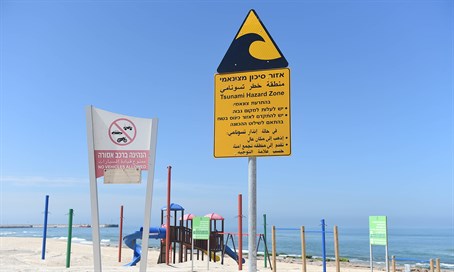 In 2014, researchers started warning that there were tsunamis that hit the Israeli coast every couple hundred years and that Israel should be prepared.

In March, Israel started preparing emergency tsunami routes for safety should such an event occur. Earlier this month there was a national tsunami drill.

At first, Palestinian media almost relished the idea of a tsunami devastating Tel Aviv and Ashkelon. But then they realized that such a tsunami would also hit Gaza, and it would not be pretty.

Images such as these started being published in Palestinian media, fueling panic:

And then came the inevitable conspiracy theories, saying that Israel was planning a secret nuclear weapons test in the Mediterranean just to destroy Gaza with a tsunami. As evidence, they cited a previous rumor that France had once tested a bomb in the Mediterranean causing flooding in Algeria.

So over the past couple of days the Hamas government has been trying to calm down residents along the coast. The interior ministry on Friday called for calm and asked Gazans not to take rumors of a tsunami seriously, whether it be natural or “artificial.”

I don’t think that these reassurances will have the intended effect.