Barghouti’s BDS Kumbaya in the NYT

Omar Barghouti, in the New York Times, characterizes BDS as “a nonviolent movement anchored in universal principles of human rights.” His punchline is:

Would justice and equal rights for all really destroy Israel? Did equality destroy the American South? Or South Africa? Certainly, it destroyed the discriminatory racial order that had prevailed in both places, but it did not destroy the people or the country.

Likewise, only Israel’s unjust order is threatened by boycotts, divestment and sanctions.

Although he doesn’t write it in this op-ed, Barghouti is arguing for a one-state solution with the “right of return” – meaning he is arguing for a new Arab state to replace Israel. He is couching this dissolution of Jewish national rights and the right to self-determination in terms of “human rights.”

Barghouti is arguing that this is not a problem, because the new state would give equal rights to all and Jews would not have to worry about being persecuted as a minority under the benevolent Palestinian Arab leadership that would be democratically elected.

These assumptions are not spelled out explicitly, but they are hiding behind the soothing phrases “human rights” and “equality” and “democracy” and “non-violence.”

Let’s talk about these concepts and how well they would apply to a single state.

Human rights – in Egypt, Copts are second-class citizens by any definition. I just posted about an Egyptian TV show where the way to insult Islamists was by saying that they are even worse than Christians and Jews.

Similarly, Palestinians are second-class citizens in Jordan, fearful of losing their citizenship. They are treated like dirt in Lebanon. Kurds are reviled throughout the Arab world.

We don’t even need to speak about human rights in Syria or Iraq or Yemen.

Even within the Palestinian Authority, Hamas and Fatah are still at loggerheads, and they had a civil war not too long ago. Journalists are threatened. Christians are intimidated.

The only place in the Middle East with decent human rights for all its citizens is Israel. It isn’t perfect, but it is a far sight better than in any Arab country. But Barghouti is trying to fool the West into thinking that Arabs will certainly grant equal rights to Jews when they cannot even grant Arab minorities a modicum of right.

Equality – Every single Arab nation, and this includes the PA, has a constitution that declares that they are Arab, which means (according to the logic that declares a Jewish state inherently apartheid-like) that they discriminate against non-Arabs. (Indeed they do, for example in immigration policies.) Most of them declare that they are Muslim nations with a legal system based on the Quran.

Minorities in Arab nations are not treated equally in any real sense (although there is guarded optimism about Tunisia.)

Once again, the only Middle Eastern nation to come close to treating all its citizens equally is Israel. To think that an Arab majority state would treat Jews equally is to ignore the entire history of the Middle East.

Democracy – the most moderate Palestinians are clearly the leaders of the PA, who at least pretend to be against violence (forgetting that the Fatah platform supports violence explicitly.)

Mahmoud Abbas just started the tenth year of his four year term. You know, the one that he promised to retire after.

The prime ministers of the PA weren’t even elected to begin with – they were appointed.

Yet again, the only place with a functioning democracy in the region is Israel. And Barghouti wants to end that.

Non-violence – Barghouti and the BDS crowd don’t like Abbas and company. They believe that they aren’t radical enough. They believe that Abbas’ non (explicit) support of terror isn’t authentic and that terrorism is a human right. Really!

BDS is a non-violent tactic, but BDSers – and particularly Barghouti – believe in “all means of resistance” being legitimate – and that includes suicide bombing.

He will never tell that to the New York Times, but he has said it in speeches for years. And other “progressive” critics of Israel share that belief.

Readers of the NYT op-eds don’t realize that they are being subjected to half truths and doubletalk meant to destroy the Jewish state.All they see are the soothing words of Barghouti hijacking democratic concepts to create another failed Arab state. But that’s not his goal – it is to destroy the only Jewish state, which – while not perfect – is closer to the ideals of democracy, human rights, equality and even non-violence than any Palestinian Arab state could ever be.

It is worth looking again at how the Arab nations pretended to want a democratic Arab-majority state as a last chance effort to frustrate the UN partition vote in 1947. They also pretended to care about democracy
and human rights, but it is obvious that their real goal was to stop any Jewish state from ever existing. Then, as now, the nice words were a sham meant to fool the West. (They even demanded to go to the International Court of Justice!)

Their most important requirement in this “democratic” state was to curtail all Jewish immigration. 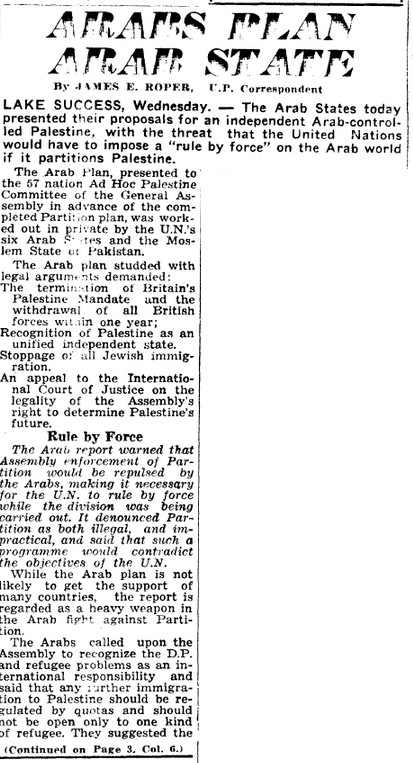 Barghouti is the modern equivalent of the Arabs of 1947.