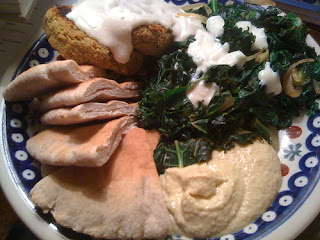 Ma’ariv reports that when President Obama visits the residence of President Peres next week, he will be served falafel balls with hummus, tahini, parsley and paprika, along with a a selection of fish such as seared tuna. Since the White House said Obama likes to eat meat, the meal will feature fillet of lamb with herbs.

There will also be a concert by Iranian-Israeli singer Rita.

So, naturally, Palestinian Arabs are upset.

They are again claiming that Israel (and Jews) are stealing Palestinian Arab heritage by pretending that falafel and hummus are Jewish/Israeli foods.

Arabs have been upset over Israelis eating falafel for years. Lebanon even once threatened to sue Israel over making falafel!

What’s fair is fair. Abbas is free to serve Obama “Bamba” when he visits the territories. Israelis would no doubt be livid.