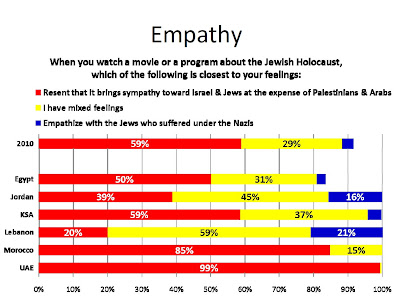 In this Shibly Telhami Brookings poll of Arab public opinion (warning – does not provide raw data or information about the methodology), slide #37 says an awful lot.


When you watch a movie or program about the Jewish Holocaust, which of the following is closest to your feelings?

As Benjamin Kerstein said in the recent Michael Totten conversation:

The broad swath of public opinion in most of the Arab countries is fundamentally anti-Semitic.

When reading the results for Lebanon, it is worth reflecting that despite Leb’s ongoing political train wreck and Hezbollah’s viciously anti-Semitic propaganda, the results for Lebanon are nevertheless the least noxious (by far) in the Arab countries polled. This may well be due, in part, to the presence of the Christian (and particularly Armenian) minority, and also the fact that Lebanon, unlike the other countries polled, is a highly cosmopolitan society with large religious minorities.

Only Jordan and Lebanon have majorities who are even willing to grant the humanity of Shoah victims sufficiently that they have “mixed feelings” or sympathies rather than resentment.

The rabid self-pity and complete willingness to completely dehumanize Jews that is visible in the Moroccan and particularly the Emirati results is absolutely breathtaking.

Slide #39 touches on some points that we have discussed before. 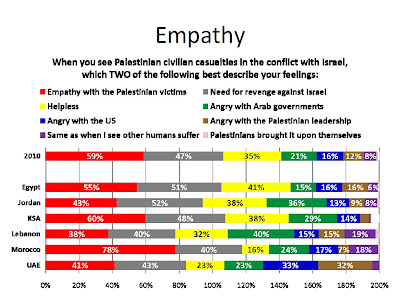 When you see Palestinian civilan casualties in the conflict with Israel, which TWO of the following best describe your feelings:

2010 results, in (1)-(8) order: (second column represents the “need” for revenge against Israel – the honor/shame/revenge dynamic; in Jordan, this supposed “need” actually exceeds the sum of columns 1 and 7 (representing empathy).

Stop and think about the consequences of the deeply distorted reporting that exists in the Arab world and in the mainstream media, in which Palestinian gunmen are labelled as “civilians” and in which clear Palestinian crimes are whitewashed, while Israeli actions are deliberately inflated and misrepresented as “war crimes.” The consequences of such blood libels, journalistic malpractice and human rights fraud results directly in the growrh of hatred and subsequent bloodshed.

In addition, when Arab regimes, media, religious authorities, pure propagandists and other opinion shapers repeatedly issue “calls to action” that involve revenge, they reinforce this response, which reinforces this dynamic in the Arab world rather than preparing populations for peace. Moroccans, so completely unready to identify or sympathize with dead Jews, are are much more likely to consider sympathy with Palestinians as opposed to revenge. On the other hand, in no country does the percentage who think that there is a “need” for revenge against Israel drop below 40%.

If you sum columns 1 and 7 (based on the guess that most survey respondents would have picked either one or the other, but not both; without more information, this is not a particularly “safe” assumption) you get the following:
67% Total
61 Egypt
51 Jordan
61 Saudi
57 Lebanon
96 Morocco
44 UAE

The differences from country to country are interesting, though.

In contrast, here is the corresponding table for empathy with Israeli civilian victims. 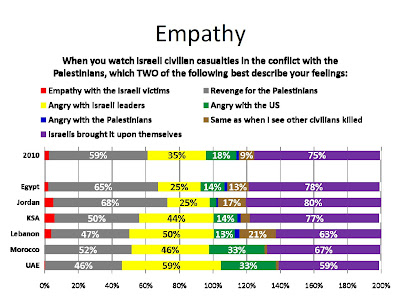 Public opinion on the Iran nuclear question yields some results that are little short of insane. 81% of Egyptians who think that Iran is trying to build nuclear weapons nevertheless say it has a right to its nuclear program. The Lebanese UAE, the Lebanese and the Jordanians really do not like this prospect.

This, of course, is why Iran needs to keep hatred of Jews and Israel burning among the Arabs; as long as it can pretend that its nukes would never be turned against the Arabs – which as I write these words reminds me of Hezbollah’s lies about never turning its weapons against the Lebanese – much of the Arab street will blindly and foolishly support Iran’s drive to acquire nuclear weapons.

Most of the respondents watch al Jazeera either as their first or second choice and get the majority of their international news from TV.

There is a lot more in the presentation than is covered in this post. You can view it here: Shibly Telhami Brookings poll