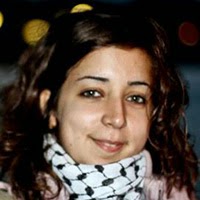 Sometimes, pseudo-intellectual haters of Israel use their pretentiousness to justify the most heinous crimes.

Baker writes regularly for Electronic Intifada, and she has also written for The Guardian. When the three Israeli teens were abducted, she gloated.

This article by Baker is in Open Democracy:

I wonder whether, when the settler-colonial army of Israel is pounding Gaza, Palestinians should grab guitars, pianos, and white ribbons, look up at their oppressors flying over their heads in apaches and F16s, and sing a lullaby of peace. Perhaps, then, we can impress Middle East “experts” and “non-violent resistance” -mind you, I am using the V word- butterflies. I wonder, moreover, what authority, defined by what experience, entitles these experts and butterflies to ask us, the Palestinians, to put down our arms. Nonsense.

…Resistance rockets fired from the Gaza Strip provide a necessary counter-discourse. The Israeli Jewish public must understand that there shall be no security so long as they do not turn their anger and frustration at their very supremacist privilege and ideological system which is embodied in the Israeli government, left-wing, centrist, or right-wing. No one is asking them to leave, but they must accept Palestinian resistance insofar as they accept the arrogance which characterises the Zionist ideology. The radical potential of Palestinian rockets, of sirens going off, lies in these rockets’ ability to disrupt a system of privilege which Israeli Jews enjoy at the expense of colonised and displaced Palestinians. Rockets, in other words, are a radical declaration of existence and unmediated expression of self-determination.

…Israel was born in May 1948 after a mass wave of ethnic cleansing which led to the expulsion of more than half the native Palestinian population. This is the aggression to which every Palestinian rocket, demonstration, and burned tire, is a response. Until Palestine is liberated, and by Palestine I mean historical Palestine, Palestinian resistance cannot be expected to wane. To be clear, Palestinians fire rockets into what belongs to them in the first place.

There is a lot more nonsense in the article, but this is enough to demonstrate the lengths some people will go to in order to justify the rabid antisemitism that the Arab world has towards Jews – which is the real root cause of the conflict.

To perverts like Baker, terrorism is moral, and the only self-determination that means anything is that of a newly-minted people whose existence is impossible to find in any literature that is over a century old. Jews, of course, aren’t a people at all.

Baker’s invocation of “historic Palestine,” whose borders were drawn by her hated colonial powers, proves as well as anything that she is not really interested in justice or self-determination – she’s interested in only the land that happens to be controlled by Jews. The complete silence of these supposed ideologues regarding any part of Transjordan is all the proof you need that their agenda isn’t as pure as they pretend.

But this essay is more than just about Baker’s hypocrisy.

Rana Baker is creating and pushing her own, new model of morality, where Palestinians – and only Palestinians – do not have to adhere to any laws, ethics or standards.

Once you justify terror rockets in whatever bizarre and disgusting worldview you have, you justify everything. Arabs can rape Israeli Jewish women for the cause. Gazans can strap bombs to newborn babies and throw them over the fence. Hamas is allowed to place Arab women and children in mortal danger in the hope that Israel will be blamed. (Oh, right, they already do that.)

This is the perverted moral universe that Rana Baker is advocating.

Not surprisingly, it is the exact same moral universe that Hamas and Islamic Jihad operate in. Just they use the Koran to come up with their justification, and Baker uses a twisted concept of liberal values like “self-determination” and “anti-colonialism.” It doesn’t matter – because the justification isn’t improtant, only th results are. And both Baker and Hamas want a lot of dead Jews.

If Jews who believe that the land belongs to them would adopt Baker’s mindset, then flattening Gaza is not only allowed, but morally necessary. Israel’s morals interfere with Baker’s morals? Well, too bad, she made the rules. Now that anyone can do anything they want if they consider themselves oppressed, we can dispense with such irritating constructs as international law or the laws of armed conflict or The Golden Rule. Baker justifies living in a post-moral world.

Not that she would admit that. She believes that her cause is unique and only Palestinians can act in any manner they choose in order to take away Jewish human rights.  She is advocating a form of Palestinian supremacy, where the rules that apply to the rest of the world do not apply to Palestinians, and anything goes.

If a Zionist Jew would write essays using the exact same language justifying terror against Palestinian Arab civilians as a necessary part of  their right to self-determination, he or she would (rightly) be called racists, while Baker’s paean to the beauty of terrorism is considered merely “anti-colonialist.” You see, after decades of Palestinians believing that they do have a unique set of rules that apply only to them, many in the world actually start to believe it.

Consistency in rhetoric isn’t important to Baker and her ilk, except for in a single, narrow dimension. The only moral or rhetorical consistency for people like Baker is that, to them, the existence of Jews maintaining anything other than their natural status of dhimmis is unnatural and must be fought, with whatever means is necessary: rockets, suicide bombs, nuclear weapons, or tendentious essays that give the Jew-haters a means to justify their sickening immorality. As one cheerleading commenter writes:

Rana, I wonder if you realise what brilliant piece you just penned down. As Arundhati Roy wrote ” Gandhi get your gun” in Walking With The Comrades I say keep those rockets from Gaza coming and let the siren echo in every stolen corner, square, street, park and home.

Baker provides the veneer of intellectualism to justify terror for those who are still uncomfortable with the concept.  The murderous rampages in Paris and Frankfurt are a natural result of the sickening supremacist of Rana Baker – because if proudly targeting civilians is a moral obligation, then so is attacking Jews wherever they might be.

What is scary is that so many so-called “progressives” would never think about calling Baker what she is: a disgusting cheerleader for murder.

UPDATE: I forgot that I fisked her before.

UPDATE 2: Best comment on the thread at Open Democracy from Podein: (h/t Alexi)

If rockets are the way Palestinians engage in discourse, then Apaches, gunships and assassinations are simply the way Israelis correct their grammar.